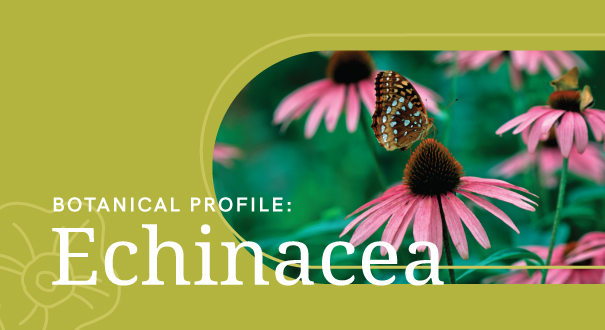 Uses: The constituents found in echinacea represent a wide variety and complex and are generally used to support the general immune system.*

Applications: They are most often found in custom formulations and compounds of teas, dietary supplements (capsules and tinctures) and used as cooking ingredients. 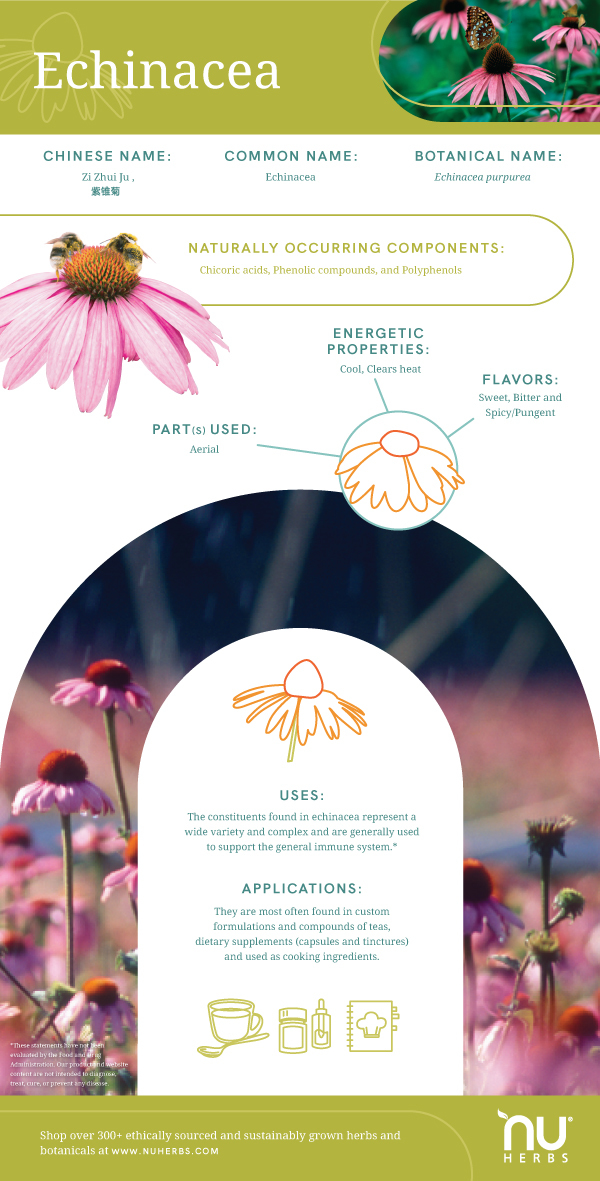 A member of the daisy (Asteraceae) family, Echinacea purpurea is among the best-known herbs in the United States. While not a foundational herb in Traditional Chinese Medicine, globalization and a rise in popularity have brought it into modern and, especially, Western TCM clinical practices.

Today, the botanical is grown commercially across North America and Europe and – and it’s available everywhere from neighborhood drugstores and big-box stores to worker-owned co-ops and health-food stores. But sourcing quality Echinacea purpurea remains a challenge for manufacturers. This perennial botanical is among the most recognizable plants used in herbalism, with purplish-pink petals, a prominent spiky seed cone and stems that can reach up to three feet (one meter) tall.

The History of Echinacea

What we now know as Echinacea purpurea first went by Rudbeckia purpurea, a name offered up by Linneaus in 1753. Shortly before the start of the 19th century, botanist Conrad Moench renamed it, though Rudbeckia stuck around until 1848, when Asa Gray published the American Manual of Botany. Echinacea feels like an accurate description of the plant, since it was derived from the Greek word for sea urchin or hedgehog, echinus. It refers to the prickly bracts that cover the receptacle of the flower. Meanwhile purpurea, borrowed verbatim from Latin, refers to a shellfish used to make purple dye. The genus and species are a nod to the common name, purple coneflower. Widely used by Native Americans, including the Choctaw and Delaware tribes, its use spread to Europe in the early 20th century through homeopathy. Even then, securing adequate supplies of the proper species was a challenge – as modern practitioners can understand.

The first research studies into Echinacea purpurea happened nearly 100 years ago, and their success yielded the first alcohol-stabilized tincture – then called a “juice” – of the plant’s leaf, stem and flowers. By 1995, it was the top-selling herb in the US, with nearly 10% of all dollars spent on herbs in “health-food” outlets.

Use of Echinacea in Western Herbalism

Today, Echinacea purpurea is used at onset for acute immune support, particularly for the upper respiratory tract.* In addition, preparations of the plant are used to support the general immune system and function over longer periods of time.* Interestingly enough, despite the plant being native to the United States, most clinical and scientific research happened in Germany.

In addition, external preparations of Echinacea purpurea can be used to support the skin and promote healthy cell turnover and the natural repair process of broken skin.* Beyond allergies to plants in the Asteraceae family, such as daisies or sunflowers, there are no known side effects for internal and external applications.

Use of Echinacea in Traditional Chinese Medicine

And, a 2020 research study published in the China journal of Chinese materia medica offered insight into its use within TCM clinical practice.  In TCM, Echinacea purpurea could be used to support evacuating wind-heat, clearing heat, support Wei Qi, promoting physical resilience and supporting wind-heat cold.* It is often used to support kidney and spleen meridians.*

Though Echinacea species grow wild across most areas of North America, usually in meadows or next to forested areas, overharvesting is a real threat. According to United Plant Savers, Echinacea species grow in all but two states east of the Rocky Mountains (Vermont and New Hampshire are the exceptions). Due to concerns about overharvesting in the wild and the risk of adulteration, we sought out to work with organic herbal growers who practice regenerative agriculture. We work with a select group of partner growers who are able to consistently provide Echinacea purpurea grown and harvested to meet our quality standards.

We currently can create Echinacea purpurea extracts under our Bespoke Extracts program, with the following specs:

You can create an account in order, explore our selection of echinacea products. Or if you’re a manufacturer who needs larger quantities, send us an email.

*These statements have not been evaluated by the Food and Drug Administration. Our product and website content are not intended to diagnose, treat, cure, or prevent any disease.